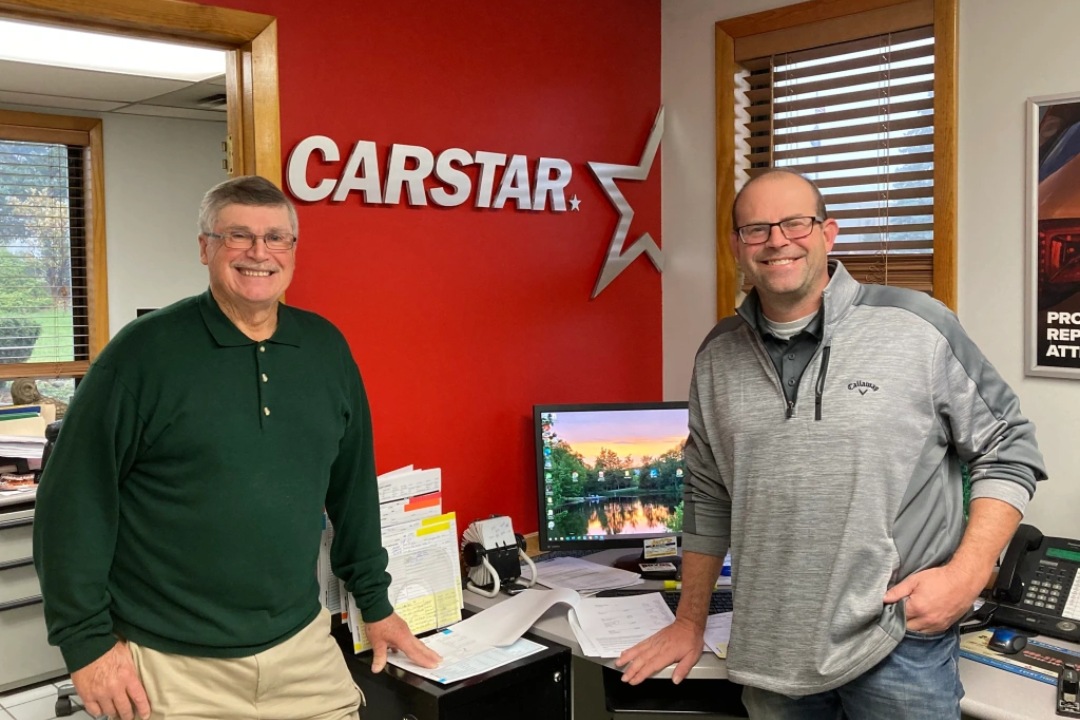 The name Jeff McKinney has been associated with auto-body repairs performed in or near Fairport Harbor for more than five decades. That tradition was started by Jeff McKinney in 1968 and has been carried on in recent years by his son, Jeff McKinney II.

The name Jeff McKinney has been associated with auto-body repairs performed in or near Fairport Harbor for more than five decades.

What began as Jeff’s Garage is now known as CARSTAR Jeff’s Garage and the elder McKinney said the business always has maintained its commitment to superior customer service.

“We’ve dedicated ourselves to making people comfortable that if the repairs are done here, we will stand behind them,” he said.

The younger McKinney said another key to taking care of customers is “treating people like family” at CARSTAR Jeff’s Garage, which is located at 1199 East St. in Fairport Harbor.

On Dec. 1, the McKinneys will mark 54 years of operating their family-owned auto-body repair shop. The elder McKinney still serves as president and owner of the business, while his son is vice president and operations manager.

The familiar name of Jeff’s Garage changed slightly beginning in 2022, after the younger McKinney purchased a CARSTAR franchise.

Bringing Jeff’s Garage into the CARSTAR network will help the business to become more competitive and successful, the younger McKinney said.

“The auto-collision repair industry, like everything else, is changing and evolving, and the insurance companies are moving toward nationwide contractors and they don’t really want to be dealing with mom-and-pop type places,” he said. “They will if they have to, but would much rather not.”

Making the transition has required a lot of training for the owner and employees, along with system changeovers and equipment upgrades. Over the years, however, the McKinneys have demonstrated a knack for adjusting to changes and overcoming challenges, while finding new ways to strengthen their business.

“I was working for Lincoln Electric at the time I opened the doors,” he said. “I was trying to run the shop in the off hours. That didn’t work out for too long because it got to be too much pressure.”

The first location was in a rented building at 1000 High St. in Fairport Harbor. Initially, the business was a full-service mechanical and auto- body repair business.

“I had a partner at the time, he was doing mechanical repairs, but that didn’t last very long. He separated from the business,” McKinney said.

Shortly after that, McKinney made some key decisions.

First, he left his full-time job at Lincoln Electric, because he always wanted to have his own business. He also decided to focus strictly on auto-body repairs, but continued to call his enterprise Jeff’s Garage.

As he needed more space to grow, McKinney expanded the size of the building as part of a deal with the property owner.

He also secured more space off-site by renting a bay in a warehouse at the former Diamond Shamrock Corp. in Painesville Township. He did body work on customers’ cars in the warehouse and then brought the vehicles back to 1000 High St. to be painted.

“So we were going back and forth,” he said.

Eventually, McKinney saw a vacant lot on East Street where Jeff’s Garage could have ample space to operate at a single site. He made an offer on the property and bought it.

A building was constructed on the land, and in June 1990, Jeff’s Garage opened its new auto-collision repair shop at 1199 East St., where it has remained ever since.

The younger McKinney got his introduction to the business at around age 10, as he came to the shop and helped out his father.

“I started cleaning cars, sanding stuff down,” he said.

After high school, the younger McKinney attended Toledo University, where he earned a bachelor’s degree in human resources management.

“My plan (after college) wasn’t to come back and jump right into the (Jeff’s Garage) business,” he said.

However, after an unsuccessful job hunt, the younger McKinney reconnected with Jeff’s Garage. He accepted a mission from his father to launch a rental car business to serve customers who brought their wrecked vehicles in for repairs.

In 2005, unexpected circumstances prompted the younger McKinney to fill a bigger role in the leadership. That moment arose when the elder McKinney suffered a severe head injury when he was struck by a heavy limb while cutting a tree.

While the elder McKinney recovered, he said he knew couldn’t go back and oversee day-to-day operations at Jeff’s Garage. He addressed that subject with the younger McKinney.

At that point, the younger McKinney took charge of Jeff’s Garage and remains at the helm 17 years later.

The younger McKinney said he’s proud of the work he’s done in heading up a business that generally employs a staff of seven or eight, which can fluctuate depending upon the season and workload.

He’s guided the business through challenging financial times, ranging from the 2008 recession to a downturn that occurred during the heart of the novel coronavirus pandemic in 2020.

The younger McKinney is optimistic about the future, especially in view of how becoming a CARSTAR franchise could bolster revenues.

“We’re just looking to go back on the uptick here, versus treading water,” he said.