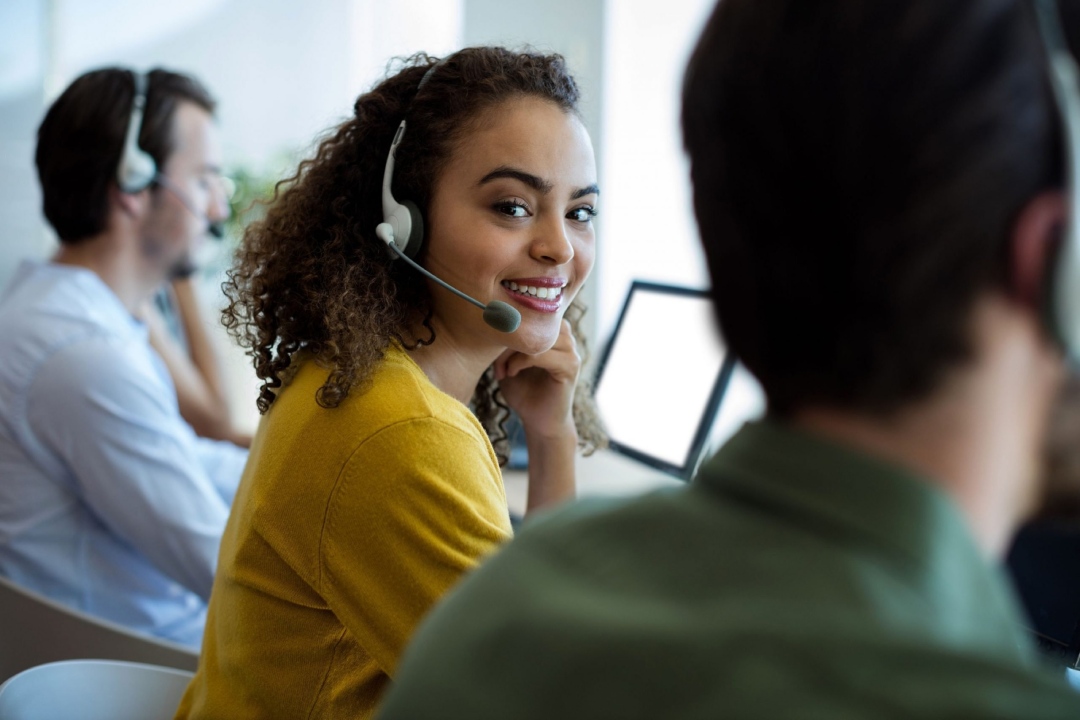 Back in 2018, Target prompted an outcry when it announced plans to shutter two of its South Side Chicago locations. One of them, the store at 87th Street and Cottage Grove, anchored a retail hub in the heart of the Chatham community for a decade and employed over 150 people.

Back in 2018, Target prompted an outcry when it announced plans to shutter two of its South Side Chicago locations.

One of them, the store at 87th Street and Cottage Grove, anchored a retail hub in the heart of the Chatham community for a decade and employed over 150 people.

Three years later, the 100,000-square-foot building got a new lease on life when Riverwoods-based Discover Financial Services announced its intention to transform the former store into a call center that would employ 1,000 people, mostly from the surrounding neighborhood, by 2024.

In the 11 years Juatise Gathings has worked for Discover Financial Services, she has managed call centers across the country.

Her role as regional operations director of the Discover Customer Care Center in Chatham is something of a homecoming for Gathings, who spent some of her childhood living in Chicago.

“For me, well before being a Discover employee, I was a girl from the South Side first,” she said.

But it’s also something of a departure since the dense, urban Chatham has little in common with Discover’s other call centers, all of which are in suburban office parks where the workforces are majority White.

“There is this ecosystem, a family and connectedness unlike we have in any other location because we do have a focus on neighborhoods and communities and our employees grow up and live in these neighborhoods. We’re proud that almost 90% of our employees live within five miles of the center,” Gathings said. “We’ve been operating for a little over a year, we have well over 150 employees that have been promoted and some of them have been promoted multiple times since starting here.”

CEO Roger Hochschild says when Discover began making plans in 2019 to open their first new call center in over 20 years, the company took a fresh look at their approach.

“Call centers are critically important for us at Discover. We’re the only major bank with 100% U.S.-based customer service. We picked Chatham because we wanted to do what we could to bring opportunity to communities that have been under invested,” Hochschild said. “I strongly believe that something that large companies can do, and only large companies can do, is bring jobs at scale into the community.”

“Close to 90% of our employees here in the center are Black. And so as part of our focus around diversity and equity and inclusion and changing the racial makeup of Discover this center is critically important to that,” said Hochschild.

Now, with about 500 employees in place after a year and half in operation, Hochschild says the data shows their community-focused approach is paying off.

“The attrition rate is less than half of what we see in our other centers. There’s a faster speed to proficiency, this is our best performing call center and I couldn’t be more excited about that,” he said.

Greater Chatham Initiative Executive Director Nedra Sims Fears says the community was indeed disappointed by Target’s departure, but Discover’s presence has “exceeded her expectations.” She says their results a year in show it makes good business sense to bank on Chatham.

Employees at the Chatham center say working close to home in jobs with growth opportunity is paying dividends for them.

Team leader Katherine Bland was among the first to join the Chatham center when she applied after seeing a billboard advertising openings. She said she did her remote interview with her infant son on her lap.

“I was really, really fortunate that this was available for me,” said Bland. “It’s been kind of like a dream come true because I could be a mom – a really, really great mom – and I can come to work and be in corporate America essentially.”

Team leader Aaron Curtis says cutting his commute from more than an hour each way to just 10 minutes has meant more time with his children.

“Before I wasn’t basically able to be in my family’s life, at all really. I wasn’t responsible for dropping my daughter off at daycare or picking her up because I wasn’t able to,” Curtis said. “With the hours I have now I can pick her up. And my son, I can see him every day now.”

Chaka Smith recently transitioned from a call center position to technical apprentice, and credits Discover with allowing her the opportunity to pursue a new path in the business technology group.

In addition to drawing from the community for its workforce, Discover scaled their service needs to allow them to contract with small local businesses, like Chatham-based RB Pest Services.

“Myself and the other businesses, we just want the opportunity,” said RB Pest Solutions owner Robiar Smith. “We don’t want any handouts; we don’t want anyone to give us anything pro bono. We just want you to point us in the right direction and we’ll pull up our sleeves and we’ll show you that we’re capable of doing work on this magnitude and even bigger.”

The Chatham center also features a community center, which local nonprofits can use at no cost for meetings and events. The rotating selection of art filling the space comes from I Paint My Mind, which curates art from local artists for businesses.

“They’re getting this incredible art in their space. So they get value and that incredible service from us,” said Evan LaRuffa, I Paint My Mind executive director. “But also knowing that that helps I Paint My Mind deliver much needed and often underfunded arts programs to local schools is way more than the cherry on top for us.”

Discover leadership says this model of community investment as a business decision has created a new blueprint for future endeavors.

“That’s what allows us to translate that into good business for us to make sure that [employees] thrive and through that they take really good care of our customers in return,” said Gathings.

“It’s really transformed us as a company. I like to say we actually get more out of this than the people of Chatham,” said Hochschild. “I think the business results speak for themselves again. As I said, this is our top performing call center. And so we are committed to Chatham for the long term.”

And one year in, the employees we spoke with say they’re all in on Discover too.

“So often bigger companies are scared to come into communities like this, right? They’re scared that they won’t get the right talent or just they won’t be successful,” said Bland. “I think Discover said, ‘Well, we’re going to take that chance.’”

“It’s a lot of untapped talent and communities just like this, but you don’t know about it until you’re actually doing it, and that’s what Discover did,” said Curtis.

And Smith encourages other companies to emulate Discover’s approach.

“Why not, Bank of America? Why not, Chase? What’s up, American Express? Jump on board, Discover’s got the right idea and the numbers are showing it it’s the right idea,” Smith said. “I can’t wait to see like a year from now how it’s changed the community and the people within it.”