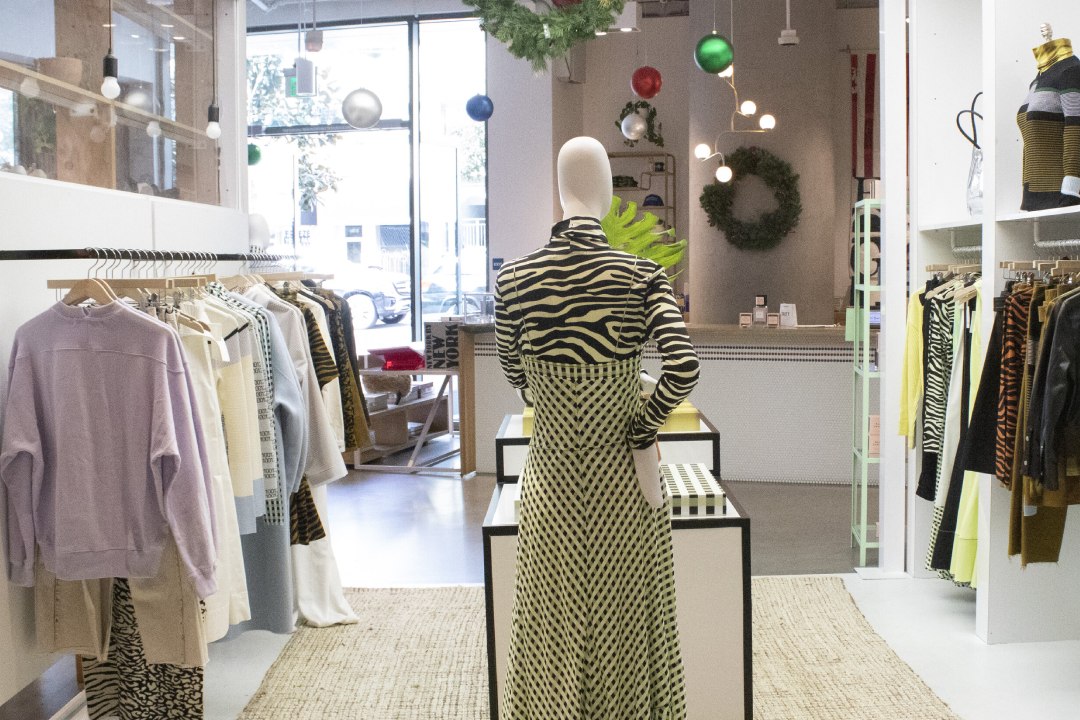 There is a new neighborhood coming to LA. This latest destination is courtesy of Fred Segal, the 61-year-old California lifestyle retailer launching its first private label brand.

There is a new neighborhood coming to LA. This latest destination is courtesy of Fred Segal, the 61-year-old California lifestyle retailer launching its first private label brand. The inaugural collection, called ‘The Neighborhoods’, consists of lux T-shirts and sweats, which in Los Angeles are considered almost as much as creating haute couture. Styles bear popular street names that denote areas of town.

Conceived by CEO Jeff Lotman of the brand licensing agency Global Icons, which acquired Fred Segal in 2019, and serves as its CEO. Lotman was smitten with the brand’s legacy and was intent on expanding and elevating the name.

“There was logo merch such as Fred Segal Sunset, Malibu, and LAX but not a dedicated collection that draws upon elements of what matters to us,” the CEO said at a preview in New York at The Public Hotel.

In tow was Alfredo Settimio, career denim and sportswear designer-slash-product developer with a knack for denim and its numerous washes. Lotman tapped the Italian-born, Los Angeles -based creative to develop the line. The tightly edited collection of T’s, hoodies, and sweats, which range from $180 to $390, is just the beginning, according to the duo.

“This is the first step towards the brand with plans to grow categories such as denim next,” said Settimio at the preview. Lotman envisions a dedicated space in the Fred Segal Stores as an ‘environment’ for the brand to grow. Settimio, who also designs and does product development for brands such as Harley Davidson, Revolve, and Kanye West’s Yeezy, instinctively updated the iconic brand logo.

“I said to Alfredo, ‘one thing I love is the great font; it doesn’t exist anymore outside of Fred Segal,’” said Lotman referencing specifically the F and R of the classic red and blue logo. “It was a reason I bought the brand. When Alfredo showed me this collection the first time, I asked ‘where is my logo?” And Alfredo said, ‘I didn’t like it; I think it needs to be modernized.'”

Lotman is happy with the current results. “If we are going to print something today, it needs to be more contemporary. The capsule should represent Fred Segal as the store but the clothing line too,” said Settimio. The result is a graphic Sans Serif block type. Further branding arrives in a taupe-colored silicone FS next to the paper hang tag that bears the original logo in the neutral shade. Lotman noted it was also on the neckband tag.

The collection is created and produced 100 percent in Los Angeles. Lotman works with a fiber spinning factory that makes the custom-blend fabrics conceived by Settimio.

“We are focused on the collection being responsibly crafted and environmentally friendly. We save on shipping costs and carbon footprints impact. Plus, I can restock within eight to ten weeks if something does well,” Lotman continued.

The recycled cotton comes in a ‘street’ and ‘classic’ material weight and California sunset colors paired with updated neutrals. The collection uses genderless sizing from zero to four. “Things are cut bigger to expand the size range; the point is for everyone to be comfortable.”

Lotman’s plans were put on hold when the pandemic hit until the beginning of the year. They revived the infamous denim bar that the brand pioneered twenty years ago (hence, one reason the new private label brand will include denim).

“My first exposure to Fred Segal was the denim bar, so we wanted to bring that back. Fred Segal invented fashion jeans,” affirmed Lotman.

The CEO said the pandemic didn’t represent a robust digital surge, unlike some other companies. “The previous owners didn’t invest in that area, so we regrouped, strategized, and heavily invested in e-comm. It’s doubled each year since 2020,” he said.

Physical retail remains vital for the brand. According to Lotman, there is the flagship on Sunset Boulevard, a store at LAX and in Malibu that is ‘killing it,’ another is in Las Vegas at Resorts World, one in Korea, plus a second one on the way.

In September, a fourth Los Angeles area store will open in the San Fernando Valley. The CEO said retail traffic has been solid and steady this year, with an unexplained dip the sector felt in June. Since the July 4 holiday, though, traffic has picked up.

In some ways, Fred Segal was the West Coast version of Barney’s New York, and their closing has been a boon to the retailer who formerly couldn’t carry certain brands that were forced to be exclusive with the now-defunct retailer.

“Right now, we are focusing on the private label brand and building the connection between the e-comm, stores, and this product. People know this brand the world over. The awareness of Fred Segal is incredible,” said Lotman.